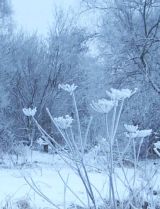 At this time of year my visits to the plot are brief, not only due to the cold weather but also to avoid treading on the waterlogged earth and creating even more of a muddy mire when the ground is no longer frozen. The site looks untidy and bleak throughout the winter months, other than when there is a covering of snow or frost and the chandelier suspended from a branch on my neighbour’s plot resembles icicles glistening in the cool winter light.
Whilst all appeared tranquil at the allotment site, tracks in the snow revealed just how much activity goes on whilst us humans are not around. Foxes have a free run of the place but there are also two large cats, which most likely prey on birds feeding on unprotected winter crops.
Now that the snow has melted, the grass on the paths is looking fresh and green. There is little to do other than adding muck to the compost heap, which gets delivered from local stables and lies with steam gently rising from it throughout the winter, waiting for plot holders to come along with their barrows. I have already collected a good amount of muck for my compost heap and have used it as mulch on some of the beds.

There was plenty of evidence of an autumn frost on my last visit to the plot. I had been anticipating the demise of the nasturtium plants, which have been growing prolifically on the compost heap over the last few summers and have now spread to other areas of the plot. The leaves were draped in an appropriately ghoulish fashion for this time of year, over the compost bins and an upturned wheelbarrow, and clearing the vast tangle of stems was made all the more difficult by the appearance of a large frog, which was reluctant to move and had perhaps chosen that spot for its winter hibernation.
This autumn I have made apple jelly from a supply of apples that I was given from another plotholder. My own apple tree is a Charles Ross which I bought from a grower up in Scotland and planted out about five years ago. It produces lovely, large and colourful apples and has fruited well over the last couple of seasons, but I barely had a chance to taste the apples this year as the birds feasted on a number of them whilst others succumbed to a tendency to quickly begin to rot. Charles Ross is a late Victorian apple that is a cross between a Cox’s Orange Pippin and an old English cooking apple called Peasgood Nonsuch, so the fruit can be used for either eating or cooking.

Last month I received an invitation to the Council’s 2010 Awards Ceremony which was held one evening in the Herb Garden in Battersea Park, at the end of a warm autumn day. Our allotment site picked up a silver cup for the Best Community Gardens Project and I received a Certificate of Merit for my plot, which was something of a surprise but very satisfying to have this specially designed piece of paper as recognition for my ongoing efforts. The charm of sitting outside in the garden intensified as darkness fell with the aroma of the plants all around and candlelit hanging lanterns illuminating the way along the main intersection of paths. Food was provided and there was a mellow and friendly atmosphere brought by the organisers and fellow gardeners gathered together.
The Herb Garden is run by Thrive, a national charity that uses gardening to help change the lives of disabled people, and this year they won a ‘gold’ for their garden at Chelsea.
Recently I visited another charity garden when I was up in the West End of London. I had a memory of small semi-neglected area of green close to the Charing Cross Road that I used to sometimes visit to eat my lunch when I was at art school there many years ago. I thought that I would take a look, fully expecting the space to have become drastically transformed by a large modern building, but I was amazed to find a thriving community garden in this dense area of urban jungle. The Phoenix Garden, as it is named, is managed by volunteers and provides a small haven for people and urban wildlife alike and is open all year round from morning til dusk.

This summer I have regularly come across shield bugs climbing amongst the foliage of plants on my plot and I enjoy watching them and am happy for them to be there since they do little damage. Often I will find one amongst the food that I have gathered as I make my journey home and feel a pang of guilt about transporting the little fellow even deeper into the urban jungle.
I have only ever seen green shield bugs before, so I was surprised to find one that was a pale purple colour, with a little green and some black and white edging. I thought that it looked exquisite and it matched the purple stock flower on which I found it. It turns out that it is a Sloe Shield Bug that can be found throughout August on shrubs including the Sloe bush, hence its name.

Sunday was one of those blissful early autumn days at the allotment. The sun was shining and whilst weeding I was accompanied by a pair of fledgling robins, hopeful of picking up a few worms. The young birds didn’t have to venture far from the nest as I have seen the parent birds darting in and out from beneath a small apple tree on my neighbour’s plot all throughout the summer.
A less likely bird to find in the area is what looks to be a kestrel that has appeared recently, circling above a line of trees and open ground adjacent to the plot or sitting perched on the top of a telegraph pole.
When I first took on my plot I was fascinated to see the parakeets and how they survive our climate far from their native homeland in India, but they do very well and at this time of year I find the ground littered with sunflower seeds where the birds have been feeding from the sunflower heads.
As I was preparing to leave the allotment in the early evening about a dozen parakeets flew past, making a louder squawking sound than usual, and I looked up to see the unmistakable shape of a heron flying overhead. I have only seen a heron there once before and this one was probably attracted by the pond which at the moment is newly filled with clear water, so there is little opportunity for amphibians and other small creatures to hide from such predators.

Recently I came across a list of things that I planned to do or achieve in the year 2002 and one of them was to get an allotment. At the end of May that year I received a letter from the Council offering me plot number 5 at New Malden Allotment Site. I don’t know what first put the idea into my head, as I had never known anyone who had an allotment, but I somehow managed to squeeze in before the onset of increasing demand for gardening space, particularly amongst us urban dwellers.
What I imagined was an area the size of a large room with plants and perhaps the odd weed growing in-between. What I found on my first visit with a friend was a space three times the size, partially covered with old carpet and thick with weeds growing up through it, a couple of rusty old locker cabinets at one end and a huge pampas grass at the other.
As an amateur gardener, taking on an allotment has been a steep learning curve but a thoroughly enjoyable one and the plot has come a long way since the early stages. A turning point was adding raised beds, the first being made from the wooden frame of a bed that I found outside in the street.
The site lies at a point where the streams of two rivers meet and a recently renovated pumping system drains away some of the water. Nevertheless, the heavy clay soil is extremely prone to becoming waterlogged and flooding in the winter months.
As summer comes to an end I am torn, as always, as to when to clear the slowly fading plants. A hard frost will bring its finishing touch but we are not there yet and in the meantime a handful of late blooming sunflowers beam down from their lofty stems, the roses and sweet peas are still in full flower and inevitably I will continue to find healthy beans dangling amongst a tangle of dying leaves and stems.
I shall miss the scent of sweet peas as I go about my work but there is a feeling of satisfaction in clearing the beds and starting afresh for the coming year.
Next
Previous